Ever wonder how companies get their names?  Older companies usually have descriptive names while newer ones have names generated by marketing departments.  A name like National Can describes what the company did well.  A name like Accenture means nothing, and says nothing about what its employees do.  Sometimes a company moves beyond their name, this is the case with the National Stock Yards (NSYC) company.

What makes National Stockyards interesting is the small set of businesses they own and operate.  The company runs the namesake livestock auction, a livestock warehouse rental business, office rentals, a legacy holding in a railroad, an equity interest in a golf course, and a large real estate development interest.  From what I could tell the railroad is defunct and exists in name only, but they still claim an ownership interest.

The company's cattle operations provide the top live revenue, but the livestock operations don't totally cover their cost.  Over the past two years the company has lost money on their livestock and livestock real estate operations.  In 2009 the company made a slight profit.  The company's auction operations profitability is closely linked to cattle sales.  The auction house gets a cut of each animal sold, fewer animals auctioned means lower revenues.  It doesn't help National Stock Yards that American beef consumption has been falling since 1970.  Beef consumption is to levels that haven't been since in the last 40 years; as Americans cut the red meat National Stock Yards suffers.  The following chart illustrates very well why National Stock Yards was able to have multiple facilities for years, and then why they eventually closed one, and run the other two days a week. 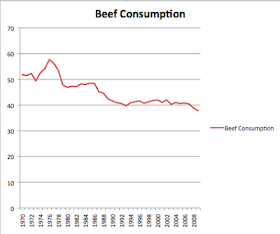 The interesting twist with National Stock Yards is what appears to be a cattle story is more of a real estate story.  The company closed down their St Louis stock yards in the late 1990s which left them with close to 600 acres of developable real estate.  Since the 1990s the company has developed and sold off more than half of that real estate.  A portion of the real estate was swapped for an equity interest in a golf course located on their land.  The golf course is held on the books at $0.  Any savvy investor can recognize that even a money losing golf course has a value of more than $0.

The real story at National Stock Yards is the future real estate development in Illinois (East St. Louis, right across the river).  The two states of Illinois and Missouri are in the process of building a new bridge across the Mississippi, the location crosses National Stock Yards land.  The company has sold a number of plots to the state over the past few years as part of the bridge building effort.  As a condition of the sale the state has put money into a trust to develop water and sewer connections on the company's land.  The state also agreed to demolish unused buildings at the state's expense.  Understanding the impact the bridge will have to National Stock Yards is difficult without a picture: 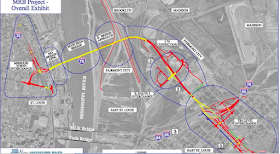 The company's land is located in or right near the blue circle with "3" on both sides, to the left of the "Fairmont City" label.  For the bridge to be completed the highway has been re-aligned and new interchanges built, one exit will provide ready access to the company's real estate.  The new bridge and connections should be open to traffic in 2014.

All of this is to say that the portion of undeveloped real estate left is highly salable, and is in a desirable location.  Some readers (most from the MidWest) will dispute my last sentence citing the proximity to East St Louis.  Painting with a broad brush, East St Louis is a very depressed and crime-ridden city, and real estate in East St Louis is about as valuable as real estate in the inner city of Detroit.  I initially wrote off the value of the company's land when I read where it was located until I took a look on Google Maps.  The company's real estate is a few miles outside of the ghetto-ish area, and abuts farmland.  The Illinois side of St Louis turns rural very quickly as one travels away from the Mississippi.

It's probably possible to get a very accurate valuation of the land for sale by calling a commercial broker in the area.  In the absence of the actual listed value I looked for some rough comps in the area.  I also took the values from the land sales to the state and come up with a valuation range:

The first value is the current book value of the property, $12,242 per acre.  The last two prices are actual comps in the area, the middle two numbers are values at which the company has sold pieces of the land to the state.  One 10 acre plot went for $247,000, and a three acre plot went for $107,000, both sales were in the past two years.

Sometimes real estate companies can end up with pie in the sky valuations when the price of one valuable piece of property is extrapolated out to the rest of the holdings.  A situation like that is possible with National Stock Yards, but I found a line in the annual report to be reassuring in this regard: "Management estimates that the fair value of the Company's St. Louis real estate is in excess of its carrying value and demolition costs.."

The best way to value National Stock Yards is on a sum of the parts basis.  The stockyards themselves throw off a few hundred thousand in operating cash flow a year, and have a book value of about $4m. I have no idea what a stockyard could be worth to a buyer, if there are any, so I'll just take book value at face value.

The company's share of the golf course is worth something although an exact value is probably impossible to obtain considering the carrying cost is zero.  The golf course is an equity investment, and unfortunately the annual report doesn't have a statement of equity.  There are a few lines showing beginning equity, dividends accrued and ending equity.  If the golf course is the only equity investment then they're accounting for a $100-$300k change in equity per year.  Maybe the interest is worth $500k, or maybe a million, either way it's a bonus to the valuation.

The final piece is the real estate holdings in East St Louis.  If we assume all of the land is worth the lowest price IDOT paid it's worth $6.5m, double the carrying cost.

Add up $4m, $6.5m and $1m and the company is potentially worth $11.5m.  Given that their market cap is currently $7.2m I'd say they're trading at a sizable discount.  If the company can sell any of their holdings for more than $25k an acre the valuation quickly becomes more appealing.

Lastly it's worth noting that in the past when the company has sold real estate holdings they generally pay out almost all of the proceeds as a dividend.  They paid a $35 p/s dividend in 2009 and a $12 p/s dividend in 2010.  I won't speculate on what future dividends could be, but they could be large.

If you're looking for more information on National Stock Yards you'll need to buy a share for $166 and call the Treasurer with proof of ownership for a copy of their latest annual report.  Of course financial information is available on Unlistedstocks.net along with details on 68 other unlisted companies as well.