How I passed on Costar

I apologize for the delay in blogging, I had some urgent family matters to attend to, and investing hasn't crossed my mind for a number of days.  Things have stabilized and I wanted to get back into researching and writing.  For anyone wondering I didn't abandon the blog, I have no intention of joining the long list of value bloggers who've disappeared.

I realize a fundamental flaw of this blog, and many stock blogs is they mostly highlights companies that are worth researching.  If I look at a company and decide to stop further research readers will never know that I looked at the company, or why I decided to pass.  Because of this an important part of my investment process is kept out of view.  From time to time I'll come across a company that I wouldn't invest in for a variety of reasons, and the company is easy to write about, Costar is one such company.  As a result I want to take readers through a journey as to why Costar was worth researching, and why I won't be investing with them.

I found Costar (CSTI) through a very dubious screen of OTC net-net stocks.  I say dubious because a number of unlisted companies I'm very familiar with appeared on the screen as net-nets, none are net-nets.  And as the operator of Unlistedstocks.net I know there are a number of net-nets on my site that didn't appear on this screen.  Even with the junky data it was a starting point.

Costar manufacturers and distributes video surveillance systems for retail and industrial uses.  The company buys parts from Asian suppliers, assembles them and then sells the video systems as a complete package to customers.  The videos and systems the company sells are familiar to most readers, ceiling mounted black cameras, standard CCTV cameras, and recording systems.  The market is large, and the company is small, I really have no idea who their target customer is.  If I had to venture a guess it'd be local retailers and industrial users who are too small to move the needle of Honeywell or a similar competitor.

The biggest draw to Costar is that they're a net-net trading at a significant discount.  At the most recent price of $2.02 they're trading at a 42% discount to NCAV, which is less than the magical 2/3 of NCAV that Graham advocated purchasing below.  Here is their net-net worksheet: 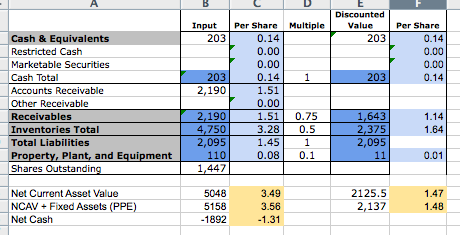 Most of the company's assets are receivables and inventory, which isn't surprising given the line of business they're in.  The company's website had a PowerPoint deck showing some pictures of their offices, assembly areas, and warehouse.  The amount of inventory is staggering, $4.7m of hard drives, wires, cameras, and electronic components.  Electronics inventory is hard to value, to Costar the parts have a value, and if parted out individually on eBay each component could probably fetch close to cost.  While the company isn't planning on liquidating, the liquidity, and resale value of inventory are important to keep in mind.  Costar has high liquidity, and high resale value, but due to the high volume of pieces some sort of discount needs to be applied.

My first concern before I left the balance sheet was that the company is running very light on cash.  The balance sheet at the last snapshot had $203,000 held in cash, but previous periods had the amount as low as $90,000.  I wondered what business dynamics put them in a position where they had large working capital requirements, but no cash to speak of.  The answer is located in the liabilities section the heading: line of credit.  The company has been aggressive at paying this item down, but at various times in the past it's clearly been used to fund working capital needs.

Debt alone isn't usually a concern, for a net-net with a shaky business I'd prefer no debt, but it's not an ultimate rule.  But Costar is the exception, in the CEO's letter to shareholders he mentioned the difficulty the company had in obtaining a new credit line for 2012/2013.  We don't have any statements since the company opened the new line of credit to know how punishing the interest rate is, the company ultimately went with Briar Capital to fund the line of credit.

When I'm looking at a potential investment, I want things to fall into place for the good or bad like puzzle pieces.  One item of data leads to another which leads to another, etc.  I don't generally read statements in a top to bottom fashion, I follow a story through them, either looking at the balance sheet and what it says about the company, or what the cash flow is saying.  In Costar's case the comment about Briar Capital led me to the income statement.

Briar Capital is an asset based lender, they talk at great lengths on their website about how cash flow isn't needed to obtain a load, good collateral is enough.  Banks are asset lenders for real estate, but for businesses they are usually income lenders.  If a company can show a consistent income pattern over months or years a bank will extend capital.  Costar had trouble with banks because they haven't had a history of profit.  The company has been chronically unprofitable for years before deciding in 2009 to execute a turnaround.

The company sold off a large division, and re-focused on the camera market.  The company has worked to increase productivity, and margins.  The company reported $688k in revenue per employee in 2011 verses revenue per employee figures for competitors ranging from $160k to $560k.  The numbers are impressive, but you can only squeeze so much juice from a lemon.  At some point the company is going to want to grow their volume, and that'll require extra personnel to build the systems, sell the systems, and manage the implementations.  My gut feeling is at this point the company is operating with the absolute fewest workers possible, and the addition of new employees to support growth could sink income into the red again.

In a PowerPoint on the company's website management lays out their turnaround strategy for the company which extends to 2014.  Clearly things are changing because the company finally reported a profit, I'm just weary of a turnaround that takes five years to execute.  At the five year mark it's unclear whether management actions had an effect, or if the market just recovered on its own.  I'm inclined to say that the market is recovering, and Costar is a beneficiary at this point.

I've talked around the income statement and cash flow statement.  The company has reported alternating periods of strong cash flow, then strong negative cash flow roughly equaling what they had brought in during strong periods.  All free cash flow is consumed by repaying the line of credit when possible.  For all the management talk about investing for growth not much cash has been needed, in the latest quarter the company spent $14,000 on capex.  The company isn't resource intensive, but it's not resource light either, they are a light-manufacturing company.

The company reported their first profit this past year, before that they broke even, or reported losses.

If you've made it this far in the post you're probably wondering what the nail in the coffin was for this company, the problem is there wasn't one nail, it was a combination of all of the things mentioned above.  The company has an average balance sheet loaded down with receivables and inventory, and a sprinkling of debt.  They don't earn enough cash to fund their working capital needs, and alternate between drawing down the line, and paying it back.  The company is working on turning around operations, but it seems like they just cut their workforce to the bone and are experiencing some sales growth as the economy recovers.

None of the above items alone was enough for me to walk away, but the combination of all of the above was it for me.  Some readers will ask the question "Since this is a net-net, aren't those problems expected, and shouldn't you just invest by the numbers anyways?"  My answer to this is bold, I think that Costar is probably fairly valued at this point.  If I were privy to the books I'd guess that inventory is overstated some, and receivables aren't going to be collected completely.  The company isn't making any money either, so with an overstated balance sheet, and no earnings, trading at a discounted NCAV is probably appropriate.

Talk to Nate about Costar