Sometimes a market investor's viewpoint is limiting.  Companies and stocks are interchangeable.  Some investors will even reference companies by their ticker symbol.  To many, even most, if a company isn't exchange traded it is un-tradable.  Institutional mandates prevent many investors from ever investing in an OTC registered stock, let alone something more esoteric.

In the United States every corporation has shares and shareholders.  These shares are legally exchangeable if certain qualifications are met.  This means in theory if you wanted to buy a piece of your plumber's S-Corp you could if they were willing to sell, and you could find a lawyer to complete the transaction.  Even though most companies aren't exchange listed it doesn't mean that it's impossible to buy shares in many of them.  There are brokers and companies that make markets in these private companies.

Cardinal Ethanol is an example of a company I described above.  They have shares available for sale, but are not traded on an exchange.  Shares can be purchased through a specialized broker whose website lists trade prices as well as a crude order book.

When a company's shareholder count crosses a certain threshold they are required to file with the SEC, which is the case for Cardinal Ethanol.  The company also provides a nice newsletter on their website with a short and useful management statement about business conditions.

The company is located in rural Indiana, which is ideal because their main raw material is corn.  Corn is distilled into ethanol which is then sent to oil refineries to mix into gasoline for distribution.  Ethanol is shipped from the distillery to oil refineries by rail.  I have a picture of Cardinal's facility below to show their reliance on railroads.  Note the giant loop for tank car storage next to their facility.  Also note that across the railroad tracks from their plant are corn fields. 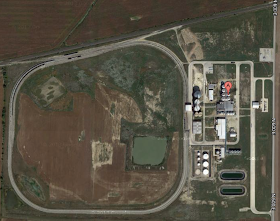 I found it interesting that the company broke down the drivers of revenue and expense in the 10-K with this graphic:

The company pays out a large portion of their earnings as a dividend.  Most recently the company paid $855 per share in dividends giving them a 13.7% dividend yield.

If the low P/E and high dividend yield aren't enough the company is also selling at a significant discount to book value.  Their shareholder equity after the  most recent distribution was $124.53m.

The company has $57m in current assets, of which $24m is cash, $20m in receivables and $10m of inventory.  The majority of their asset value resides in their facilities, the plant and equipment.  One could easily argue that their land and facilities aren't worth much because it's probably hard to liquidate an ethanol plant and sell rural land.  The flip side of that argument is it's easy to sell an asset that's generating $25m in income a year, even if it's located in rural Indiana.

The company had focused on paying down their debt in response to the financial crisis, and pressure on ethanol prices.  Now that their debt is more manageable they are planning to focus on increasing the volume of ethanol they produce in an effort to push their plant to capacity.  The company has a lot of operating leverage, if they are able to generate the volume they need their net income could see a significant increase.

There are a number of risks to this investment.  The first is the limited market for shares.  While it might be easy to purchase shares it is probably not easy to get out, especially after a bad quarter or bad year when other investors might want to sell too.  A second risk is really a dual risk, corn prices and ethanol prices.  Corn and ethanol are closely related commodities, but they are also distinct.  Factors that could change the price of one might not have an effect on the other.  This could put the company in a situation where their input price is high and their output price is low.

The last risk is that it might be a very long time before value is realized.  Due to the extremely limited market these companies seem to trade off of dividend yield, not earnings or book value.  While the company seems cheap on all reasonable metrics investors in this market might consider it fairly valued or overvalued.  As trading volume is low it might be a long time before the company's true value apart from their dividend is recognized.

For those able to stomach these risks the rewards appear appropriate.  It's not often that a company like this comes along.

How do I find more stocks like this? For a full outline of my personal investing system, go here.


"You've got to get out while there's gold in the air.." - Deep in the Motherlode, Genesis