Maxxam, unbelievably cheap at 27% of BV and potentially 2x earnings

The common refrain being tossed around by investors right now is that bargains are rare, and good bargains non-existent.  In some senses I agree, there aren't lists of profitable net-nets, or companies earning 15% on their equity at 50% of book value, but there are still bargains to be had if you look deep enough.  I did nothing special to find this stock, simply navigated to OTCMarkets and saw it on the front page.  From there I investigated further.

Maxxam's (MAXX) main business before 2007 was real estate and real estate development.  The company owns country clubs and resort communities in Arizona and Puerto Rico.  They specialize in second home and vacation home real estate.  The company's sales came crashing to a halt in 2008, and they have had substantially no new revenue since then.

The company has struggled to generate cash flow to as they've struggled to survive over the past five years.  Executive salaries have been cut, and the company delisted from the NYSE, which purportedly saved over $1m.  To put their despair into perspective, the company generated $9.1m in sales for the first nine months of 2013 from their real estate leasing division;  in 2007 they made $34m and in 2006 $77m over the same period.

The company started to monetize their assets in order to ensure their survival.  They sold half of their greyhound racing operation to Penn National Gaming.  They have also sold off various properties as opportunities arose.

What's left is a company that's a loose collection of cash, marketable securities, and interests in a number of joint ventures.  Here's a break down of their assets and liabilities: 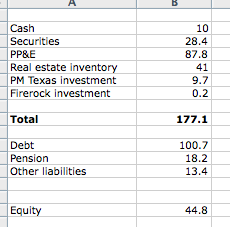 The value appears straight-forward, there is $177m worth of assets and $132m worth of liabilities for an equity value of $44m.  Considering that the company's market cap is $12m, their book value of $44m is fairly incredible.

A deeper reading of the annual report reveals that there is much more to like about Maxxam.  The first is their debt situation.  The company has $100m in debt, of which all of it is non-recourse and tied to their real estate.  The non-recourse debt is held by one of their real estate subsidiaries.  In theory if the company decided to default on their debt the bank could take the properties the debt is secured by, but not any of the holding company assets.  This means that the company's cash, securities and other investments are protected in the case of a debt default.  The truth is in a bankruptcy court all rules are thrown out and it's possible creditors could make a grab at the company's cash or other assets.  Even if creditors weren't successful it would waste the company's cash to defend against those claims.

The company carries their greyhound racing operations on their books at $9.7m, which is a potential source of hidden value.  The company sold 50% of the operations to Penn National Gaming for $40m a few years ago.  It stands to reason that if the half they sold to Penn National Gaming is worth $40m, then the 50% they retained is worth $40m as well.

The company's Firerock investment is valued at $200,000 on their balance sheet.  The joint venture owns a country club golf course.  The country club has been losing money and the company has continued to write down the value of their investment.  Even though country club is losing money, I don't know of many golf courses that can be purchased for $200k in cash.  I would imagine if Maxxam decided to sell this venture they'd receive much more than their carrying value.

The last item worth mentioning is the company's earnings.  Their earnings come from real estate leasing, their racing operations, and asset sales.  It stands to reason that earnings aren't completely repeatable if asset sales are included, but they are worth mentioning.  The company earned $7.9m in the most recent quarter, and earned $6.4m for the last nine months.  If they merely broke even in the fourth quarter they're currently trading at 2x trailing earnings.  The company's earnings were derived from racing land sales, realty sales, and lot sales, plus leasing revenue.

The caveat with Maxxam is that there aren't many shares available for purchase.  The CEO owns 73% of the common and preferred stock as of the last annual report.  This is both good and bad for investors.  The good news is the CEO is highly incentivized to keep the company out of the hands of creditors.  The bad news is there are not many shares available to purchase, and minority shareholders essentially have no rights, they are tagging along on this investment.