SWS Group, will they receive a higher takeover bid?

A company is worth what someone will pay, the ultimate cliche regarding fair value.  What happens when the price offered is far too low for the value to be received?  Investors love to purchase businesses at a discount in the market. Yet when a company makes an offer for another public company at less than book value we feel cheated.  "How can they do that?" "Don't they realize how low their offer is?" "This can't be happening.." If only the market were efficient and fair; this sort of thing would never happen.  Of course that means there'd also be no opportunity for a higher bid, which is what investors in SWS Group should be hoping for.

A week and a half ago investors in SWS Group (SWS) might have received what they wanted, a higher share price.  The higher price came in the form of an unsolicited offer to buy the company at $7 per share from Hilltop Holdings (HTH).  Hilltop Holdings is a financial holding company with subsidiaries that include: a bank, an insurance company, a mortgage origination company, a financial advisory.  Hilltop Holdings' businesses aren't that different from SWS Group's holdings.

SWS Group owns a bank, a retail brokerage, an institutional brokerage and a clearing company.  A change for readers of this site, the company is listed on the NYSE and has a sizable market cap.

Sometimes an unsolicited offer to purchase a company is completely unexpected.  A potential acquirer has a company on their radar for years and when an opportune time arises they pounce and make an offer surprising the target company.  I doubt that was the case with SWS Group and Hilltop Holdings.

Hilltop Holdings positioned their purchase offer as highly beneficial to both parties, and attractive at the most recent trading price.  SWS Group's businesses do seem like they'd be a good fit inside of Hilltop Holdings, but not at $7 a share.

I think the offer is low because it values a company with a $314m book value at $233m.  If the company isn't worth book value then maybe this is a fair offer.  Without too much investigation I think it's clear SWS Group is worth at least book value.

SWS Group breaks apart their subsidiaries into four reporting segments, retail brokerage, clearing, institutional brokerage, and their bank.  The easiest place to start in determining a valuation is with their bank.

SWS Group's bank, Southwest Securities FSB isn't going to break any records for profitability.  They earn a measly 3.71% on equity and have a lower than average net interest margin.  The bank is fairly well capitalized and their loan book is in relatively good shape.  I have included a snapshot of their current performance metrics as well as a quarterly income summary below. 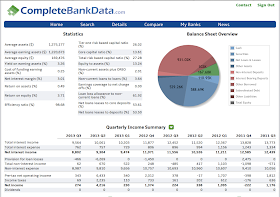 The bank has only had one loss in the last nine quarters, and in the last nine years lost money in 2010 and 2011.  It's worth noting that they have a terrible efficiency ratio.  For every $100 dollars the bank earns in revenue $98.68 goes towards expenses, which is higher than average, and an opportunity for an acquirer.

The bank is profitable, with some cost cutting they could become even more profitable.  Their book value is $168m, or about $5.06 a share.  The bank valued at book value is 72% of Hilltop's offering price.  Readers can argue in the comments over whether book value is a reasonable take out value for the bank, but it's the peg I'm going to use.  If you haven't noticed there aren't many profitable banks selling for less than book value anymore.  Some might argue this bank is worth 1.2-1.5x book value, not an unreasonable assumption either.

If we subtract the value of the bank, $5.06 from the offer price of $7 we see that Hilltop Holdings is offering $1.94 or $63m for the rest of SWS Groups holdings.  To see if this is a fair price let's take a look at what the company's segments earned last year:

One more factor to consider in the $63m valuation is that the Other Consolidated Entities segment holds SWS Capital, a dormant investment vehicle with $20m in assets.  Hilltop Holdings is attempting to acquire the brokers and clearing for effectively two times earnings.

It's certainly a reasonable assumption that there are a lot of expenses that could be cut at both the holding company and subsidiary levels.  It's the valuable businesses and expenses waiting to be cut that Hilltop Holdings sees in SWS Group and is hoping to capitalize on.  It's possible that many of the expenses SWS Group's holding company incurs would overlap with expenses at Hilltop Holdings meaning potential synergies from this merger might be realized.

The fact that Hilltop Holdings is offering SWS Group shareholders less than book value for their shares should be the first sign that the offer is low.  If shareholders take a few minutes to evaluate what they own they'll find a lot of value simply beyond the company's book value.  Shareholders already appear to expect a higher bid with shares trading at $7.62, almost 10% higher than the latest bid.  If shareholders were to receive book value for their shares Hilltop Holdings would need to offer $9.52 per share, considerably higher than their initial offer.

Buying at the current price offers the opportunity for a sizable gain if a higher bid is received, and has a maximum loss of 8% if the offer is accepted.