In Part I of this series, "What is an Oddball Stock?", we mentioned that the pattern of Oddball opportunity over the market cycle goes from just cheap to cheap assuming activism or a "one day" type of liquidity event. Recently there have been quite a few of the one-days happening: Paradise, Inc., Vulcan International Corp, Stonecutter Mills Corp, Randall Bearings, and so forth.

Unfortunately, a lot of the remaining Oddballs that have not had their "one day" are continuing along earning low returns on equity, cheap relative to the liquidation value of their assets - but that asset value has to be discounted because they function as jobs programs for insiders.

What do we mean by "jobs program"? Well, we would describe those as companies that are earning low returns on equity for shareholders but paying quite a high percentage of assets or shareholder equity as salaries.

In a recent Issue of the Newsletter we wrote about a small rural bank: Southern Community Bancshares, Inc. (OTC: SCBS), the holding company of First Community Bank of Cullman. That is a small town of about 15,000 people located 50 miles north of Birmingham, Alabama that was ranked among Businessweek's "50 Best Places to Raise Your Kids" in 2012. This is one of the dwindling number of small banks still trading at substantial discounts to tangible book value. The current offer for the stock is $8.55 (bid is $8.30), and with the 505,592 shares outstanding that makes for a market capitalization of $4.3 million. Meanwhile, the stockholders' equity is $10 million, up from $9.7 million the previous year, for a price-to-book ratio of 0.43x.

There are no intangible assets on the balance sheet, nor is there goodwill. There are a surprisingly small amount of investment securities (U.S. government agency, municipal, corporate, and mortgage backed): only $6.3 million of which $5 million is maturing within five years. The bank had huge loan growth over the past year, from $58 million to $90 million (a 55% increase!). This was funded by a $20 million increase in interest bearing deposits and a $7.5 million increase in borrowings from the FHLB.

Interest income grew 52% and interest expense almost tripled, so net interest income after providing for loan losses only increased by 34%. But the amazing thing is that net income was actually down year over year, falling from $398k to $374k – a sub-4% ROE both years. The reason was a big increase in non-interest expense, primarily salaries and employee benefits. Possibly, someone made (and perhaps deserved) a big commission on the $22 million in new loans (which if so would be a one-time expense).

However, the other gotcha if an investor is looking at this from a P/B perspective (and since ROE is so low how else is there to look at it?) is that there is over $5 million of property and equipment on the balance sheet, which feels like quite a bit for a bank with only $10 million of equity. Looking at the footnotes, this is mostly land and buildings/improvements, so we are guessing that we must be seeing the balance sheet effect of the building depicted below: 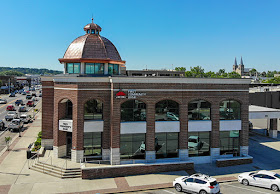 Another cupola! Perhaps we need to start a Bank of Utica Small-Town Bank Headquarters Hall of Fame? Having half of the bank's equity tied up in premises makes the 57% discount to book value feel much less generous.

According to the Form FR Y-6 filed by the holding company in 2017, there is an employee stock ownership plan that owned 25% of SCBS. Other insiders are reported owning significant stakes as well (the company does not provide ownership figures in the notice of annual meeting). So the insiders have significant skin in the game. They must be really bullish on rural northern Alabama real estate to have spent half their equity on this building. We will have to stop and see the town next time we are in the area. (One other odd thing is that they still have $326k of "occupancy expenses" despite owning $5 million of real estate and apparently having only one branch.)

But it underlines the absurd business model of small banks, which we have been harping on for the past year. Imagine if you were going to take $10 million in equity to start a fixed income closed end fund – or maybe a business development company. What if someone foolishly offered to guarantee your liabilities so you could borrow really cheaply and lever up ten times. Wouldn't you hope to earn more than four percent on the equity after all that? And would you spend half the equity on a headquarters?

Like many small banks, maintaining this as a going concern seems to be of dubious value to shareholders, compared to the immediate return (and opportunity to redeploy capital) that they would get if the bank were sold. Instead, its purpose as a company might perhaps be better understood either as a jobs program ($1.65 million of salaries) or as civic monument with a copper cupola.

If the bank can maintain its net interest margin (which may be tricky with short term rates higher than what they paid on deposits last year), this situation might continue indefinitely, even though it may not be the most efficient use of shareholders' capital or the most efficient way for society to provide deposit and lending services to rural northern Alabamans.
Oddball Stocks Newsletter
Share